I knew that it would be tight squeeze to catch my flight on Friday since this day also happened to be the last day of school.  Fortunately, students were dismissed at noon which gave me the time I needed to make my 1:50pm flight.  I, in fact, had enough time at the airport to enjoy a mushroom pizza and finish my final assignment for an online class I was taking through UC San Diego extension. (Does anyone else take a picture of where they have parked their car so they won’t forget?)

My flight to Utah was short, sweet, and uneventful.  Since it was such a short trip, I had just a carry on and my purse.  This allowed for quick exit once I arrived to Salt Lake City.  I picked up my rental car and made my way to the Utah Valley Marathon expo.  Sadly, my rental car smelled so strongly of cigarette smoke, that I had to stop and purchase an air freshener to help mask the stench. 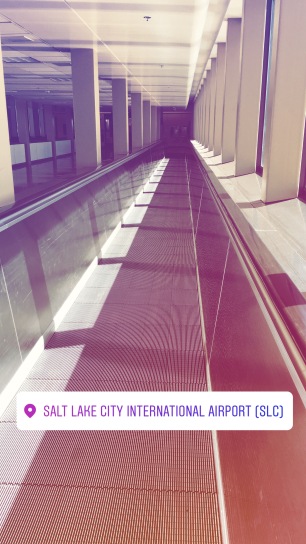 Due to traffic, it took me a little over an hour to get to the Utah Valley Marathon expo in downtown Provo.  Once I arrived to the Utah Valley Convention Center, it was easy to locate the expo and pick up my bib & race packet.  This was the Utah Valley Marathon’s 10th anniversary and because of that each participant received a race jacket instead of a Tshirt. I still wanted a Tshirt to go along with my jacket, so I bought one at the expo. Speaking of the expo, it was organized, well stocked with great vendors, and had a great line up of speakers! 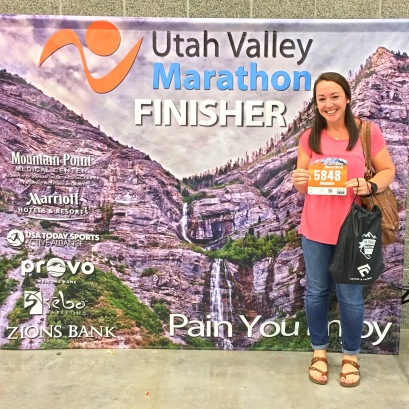 After leaving the expo, I enjoyed the views surrounding Provo, found a local vegan Mexican restaurant, and checked into my hotel.  My hotel wasn’t anything to rave about, but what do I expect when I book one of the cheapest hotels I can find?  The room looked as though it hadn’t been cleaned (there was still a towel hanging up in the bathroom) and the room felt as though it was 90 degrees!  I ran the window air conditioning unit all night, but it seemed to have little effect on the overall temperature of the room.

I could not get over how majestic the surrounding mountains looked!  I too live fairly close to the mountains in the Sacramento Valley, but not quite as close as Provo’s mountains. As I looked at the mountains I had the revelation, “I’m going to be running those mountains!”

I laid out my race gear, a pre-race routine, and tried to get some sleep since I knew my alarm was set for 2:30am. Yikes!

The Utah Valley Marathon is a point to point course. Participants load up on buses that take them to the starting line. The bus service begins at 3am and the last bus leaves at 4:15am. I ended up getting on a bus at about 3:30am. I packed up all of my stuff and checked out of the hotel at about 3:15am.  As I took the following picture, my thought was, “Wow!  It’s early!” 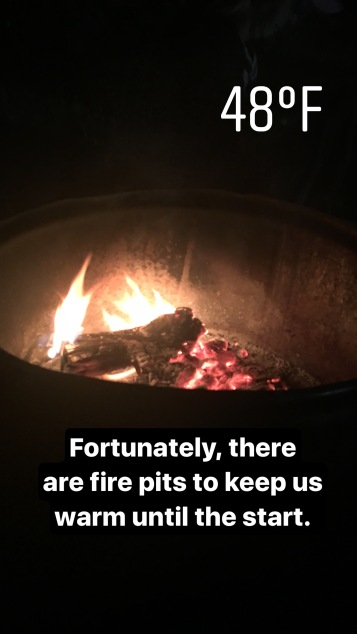 If you’re thinking about doing the Utah Valley Marathon, I recommend taking something warm to wear and/or wrap yourself in at the starting line to help you stay warm. I took a blanket with me to the starting line and was glad I did. At about 15 minutes until the race started, I shoved my blanket in my drop bag and handed it over to a race volunteer. (Yes, it was 48 degrees when I arrived to the starting line at 4:16am and it dropped to 39 degrees at 5:36am when the sun starting rising!)

Before I knew it, it was time for the race to start.  I lined up near the 5:30 fellow Beast Pacer because I knew that with the elevation lack of training, I’d be running pretty slow.  I, however, had no idea how slow I’d actually be going.  Right from the start my stomach didn’t feel right and I was having difficult catching my breath.  I checked my heart-rate on my Garmin Forerunner 235 and it wasn’t too terribly high.  I just couldn’t catch my breath.  At mile 4, I stopped to use the restroom, and again at mile 7, and again at mile 13.  I didn’t mind, however, because I was there to enjoy the views and have fun!

As for the course, it was probably one of the most scenic races I’ve ever ran! Bodies of water (including a waterfall), greenery, mountains, rock faces, etc. With such a wide variety of views, there’s bound to be an elevation change! The race started about about 6,200 ft. and ended at about 4,200 ft. My home is located at 60 ft. above sea level. To say that I was not trained to be running at elevation would be an understatement. Next time, I will train more and get some training in at a higher elevation.

Throughout the course, there were plenty of porta-potties, Cliff gels, water, Powerade, and enthusiastic volunteers. There were even frozen Otter Pops at about mile 24. That was the best tasting Otter Pop EVER!

One of many highlights of the course was meeting fellow Pro Compression ambassadors Stephanie and Holly at one of the final aid stations.  All three of us were wearing the June sock of the month.

The Utah Valley Marathon’s finish line was one of the best I’ve seen. It was in the middle of University Ave., there were many people cheering, and there were Jamba Juice smoothies waiting for us once we crossed the finish line!  Fortunately, I had some cash in my Nathan hydration bottle because there were cinnamon rolls for sale at the finish line. #irunforcinnamonrolls 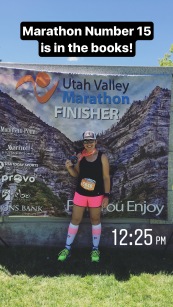 Overall, I’d highly recommend the Utah Valley Marathon. Hmm… I may even have to go back and run the race again sometime.  This race was extra special to me, as I mentioned on my Instagram post because it is the end of my running for a while. I’ll still be moving my body and exercising, but I’ve been ordered to not participate in any high impact workouts until further notice. The #utahvalleymarathon was my third full marathon for 2017 and my 15th lifetime marathon. It was an amazing, sole-filling, whirlwind of a weekend, but so worth it!

Check out my Utah Valley Marathon race review and others at BibRave.com 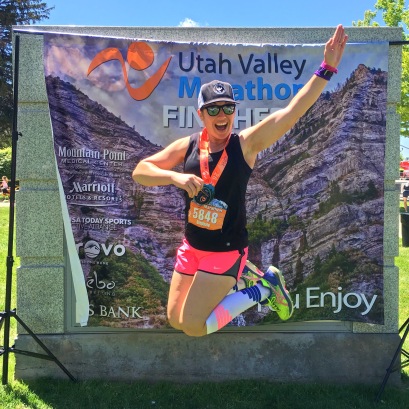 Hi, I’m Stephanie, aka RunStrongRun. I am a wife, bonus mom to two teens, IVF warrior mom to a toddler, runner, educator, and lover of Jesus. It’s my mission to help you find strength in running, parenting, and living life to its fullest. Learn more >>