This was my third time running the Women’s Fitness Festival, but probably my favorite one yet! My first time was in 2013.

At this time, there was a half marathon option. I, and my friend Melissa, met up and ran the half marathon together. I remember the race being hot. Although we enjoyed each other’s company, we both did not have a fantastic race that day. My second time running the Women’s Fitness Festival was last year and I did the 10k. It was fun and I loved getting to meet Deena Kastor, but it was a little lonely doing the race on my own.

This year, I did the 10k and was certainly not alone. Somehow, I managed to have 7 of my girlfriends there to participate in the event with me. And I loved every moment of it!

The day before the race, since I was already in Sacramento for a meeting, I went to Fleet Feet and picked up everyone’s bibs & shirts.

Four of us were among the first 500 to register, so we earned a special, race-specific, Momentum Jewelry wrap! (Can you spot the extra Momentum Wrap in the picture? I carpooled to the race with a total of 4 other ladies. I could not have one of ladies miss out on receiving a special wrap and since I did not want to give mine away, I bought an extra one. :))

The next morning started out at 5:15am. Yes, it was quite an early morning! I knew that the Women’s Fitness Festival was a bigger race, so I didn’t want to chance missing out on parking, etc. Especially with having some friends with me who are new to whole racing scene. I wanted to make this day memorable for them so that they would continue to do more races with me! The race email that was sent out recommended that we arrive around 6am, so that is why we agreed to meet up at 5:15am to carpool down to Sacramento. (Although it was nice being able to park on the street for free and close to the starting line, next time, I’d leave the house closer to 5:45am.). Besides being able to park for free on the street close to the starting line, another advantage to arriving early was no lines at the porta-potties and they were clean!

While waiting for @sweating_awesome, @mrs.motherrunner, and @kelruns72 we took a few pictures in front of the Sacramento State Capital building and took a classic Pro Compression sock pic.

Before we knew it, the time had come to line up in the corral. Four of us went one way and the other four went the other way.

Prior to the race starting, Alandrea and I agreed to stick together. Sometimes races are all about enjoying one another’s company and not so much about earning a PR. For the whole 6.2 miles we chatted, laughed, and smiled through the miles. It’s too bad we live an hour away from one another because it’d be nice to run together. 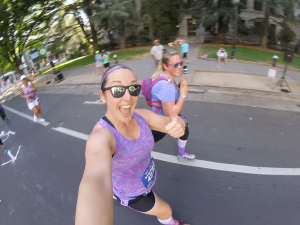 At the start of the race, the course was quite crowded. Even though there were clearly marked pace signs in the corral, there were still people who lined up at the 8 min./mile pace and walked from the start! Perhaps there should be a race etiquette 101 sheet passed out with the bibs and shirts. I know that there were a lot of first time runners out there and they didn’t mean to line up in the wrong spot (for the most part). They just didn’t know any better.

The 10k course was a looped course. It was basically the 5k course two times. Soon after the race started Alandrea and I lost both Christa and Kelly. As we began our 2nd loop, however, Alandrea said, “Hey, look! It’s Kelly!” Sure enough Kelly ended up in front of us (even though she said she was going to run slower than us) and there was no catching her!
Once Alandrea and I crossed the finish line, we took a few pics in front of the Sacramento State Capitol building, ate some food, met Deena Kastor, and met up with the rest of the group.

Christa, @sweating_awesome, earned a new PR which certifies that she is unstoppable! There’s nothing that she can not do!

We swung by the mimosa garden before making our way home. 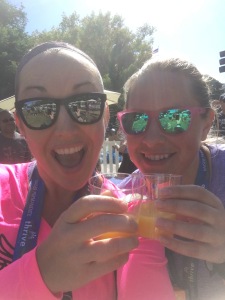 The day before the race, the ladies and I were texting back and forth about carpooling and I volunteered to drive. I knew it’d be a tight fit, but I knew it was a fairly quick trip. I decided to snap a picture of all of us in the car so that My husband would perhaps be convinced that I need a bigger car.

When My husband saw the picture, his response was, “That’s a lot of people in one car.” LOL

Do you ever participate in races “just for fun” with no goals in mind? Do you prefer to race / train solo or with friends?

I didn’t run nor workout today. Instead, I went to church and spent quality time with this little girl who is growing up right before our eyes! ❤️ As much as I love my job as a 5th grade teacher, I also really love my weekends off. This was a busy weekend for both baby and I since wherever I went, she came with me! A 5k race and a hike yesterday, church in her @janieandjack dress, cleaning the house, and shopping at Target today. It’s 8:30pm and now that baby is in bed, it’s time for me to get some work done on my computer in preparation for the week ahead. All in all, a wonderful weekend! I hope you too had a great weekend! ❤️ . . . #janieandjack #seraphinakay #oneyearold #runstrongrun
A 5k PR in the morning while pushing Seraphina in the stroller, then a 3 mile hike in the afternoon while carrying Seraphina in our hiking pack. 💥 A tiring, but super fun day! I’m so thankful that Seraphina loves being outside with me as I run, hike, and adventure! Happy Saturday friends! 💕 . . . #hiking #optoutside #goodr #sherpani #bobmom #bobgearmiles #motherrunner #bibchat #womensrunningcommunity #inspiringwomenrunners #pr #seraphinakay #motherdaughter #runnerscommunity #instarunners #runstrongrun
Tighten your ponytail because it’s Friday! 💥 On the blog today is my current Five Friday Faves including this @handful Y Back sports bra! runstrongrun.com . Happy #friyay friends! . . #handfulBR #BibChat #sportsbrasquad #womensrunningcommunity #inspiringwomenrunners #runnerscommunity #instarunners #motherrunner #bibravepro #gogarmin #runstrongrun
Thursdays are my favorite day of the week! 💥 Why? 1. It’s the tail end of the work week. 2. The weekend is so close I can taste it!💥 “Why not Friday?” you may ask. 1. My 5th graders get a little antsy on Friday in anticipation for the weekend. 2. I’m busy grading Friday assessments and prepping for Monday on Fridays. 3. By the time Friday night rolls around, my weekend is already 1/3 of the way over! 😂 Happy Thursday friends! 💕 Which day of the week is your favorite? . . Oh! And only 10 days until the @nvmarathon! 🍷 . #teacherlife #thursdayvibes #motherrunner #sunset #bobgearmiles #bobblaze #runnerscommunity #inspiringwomenrunners #bibchat #womensrunningcommunity #dolife #NapaMaraBR #instarunners #runstrongrun